IT projects face any number of challenges – tight deadlines, complex stakeholder relationships, multiple systems and end-users, and difficult technical issues. The Ministry of Education’s Education Sector Logon upgrade had all this to contend with, and more.

The project, described by the Ministry as the most complex IT project in the education sector in over five years, also had the legacy of the troubled Novopay payroll system rollout from 2012 to overcome. That meant winning back the trust of some important members of the education community, such as teachers and school administrators, was key to success.

One of three finalists for the 2018 Psoda Project of the Year Award at the Project Management Institute of New Zealand (PMINZ) Awards, the project involved moving over 70,000 users onto a new central identity and access management system, which provides secure access to 22 core business applications

According to project manager Patrick Rogers, the $16.7 million project stands out for its:

A factor which added greatly to the overall complexity of the project was that it dealt with a variety of wide-ranging and sometimes divergent stakeholder groups from a number of political, commercial and public arenas – all of whom had to be managed appropriately, sensitively and effectively.

Stakeholders comprised not only teachers and school administrators, but also multiple agencies from across the education sector who use the Education Sector Logon, including the New Zealand Qualifications Authority (NZQA) and the Tertiary Education Commission (TEC).

This presented a complex dimension which required thoughtful and timely management of stakeholders, from agency level through to competing private service providers.

“We developed a wide and deep multi-layer engagement model to ensure all people impacted within each stakeholder group were identified and addressed with the right information and support at the right time and in the right way,” says Rogers.

Crucial to the success of the project was the governance provided by an Education System Identity and Access Management programme board, which included senior management representatives from all the impacted agencies.

Meanwhile, to ensure end-users were kept engaged and properly prepared, extensive testing and measuring of the service was conducted, along with in-depth training, support and communications. A reference group provided an objective assessment of how ready end-users were before the system launched.

One of the key objectives of the new Education Sector Logon system was to enable safe and secure identity and access management across the education sector.

To achieve this, the project team looked to the RealMe Logon and Identity Verification Service developed by the Department of Internal Affairs.

Rather than design and build a new identity and access management system from scratch, it was decided to develop a new RealMe service based on and operating in the same infrastructure as the existing RealMe service.

However, this required a level of cross-agency collaboration which is unique in the public sector, says Rogers.

“This was the first time the Department of Internal Affairs collaborated with another government sector to provide a comprehensive service complementary to RealMe,” says Rogers.

As a result, the project delivered an asset which could be re-purposed for use by other government agencies.

The technical complexity of the project was another major factor to overcome.

The Education Sector Logon system was replacing two previous systems used to authenticate users and to manage access to applications used by teachers and administrators. Since the core software of one of these systems was out-of-date, with support about to end, the project was faced with a non-negotiable deadline.

With a significant amount of Microsoft infrastructure deployed in the education sector, the team decided Microsoft’s Azure Active Directory B2C cloud-based identity service would be an ideal component in the new system.

There was one catch – the technology had not yet been released.

“Because time was running out for us, we couldn’t wait for the software to be released, so we had to approach things differently and deal with Microsoft’s international head office in Redmond directly,” says Rogers.

The project was the first and most complex Azure identity and access management implementation of its type at the time, creating opportunities for Microsoft to kickstart similar projects across the world, adds Rogers.

Agile or waterfall? Both!

The overall management of the project was also distinctive for its innovative and flexible approach, says Rogers.

“From the start, we decided individual project work-streams would be run using the most appropriate approaches to deliver the outcomes required,” he says.

As a result, both Agile and Waterfall methodologies were used across the different work-streams of the project.

While there were some complexities running the two approaches alongside each other, with proper planning it was achievable, and meant the best toolsets were used for each part of the project.

“It does not make sense to blindly follow a particular methodology – you need to focus on the outcome you want to achieve and apply the approach best suited to lead to that outcome,” says Rogers.

Overall, Rogers believes this project can serve as a model for not only future Ministry of Education projects, but also for similar public-sector projects.

The PMINZ Awards will be announced at the 2018 Project Management Conference in Auckland on 20 September. The Psoda Project of the Year Award recognises superior performance and execution of exceptional project management. The two other finalists for this award are Mercury for its Maraetai Dam Intake Rehabilitation project and Beca for the Watercare Mangere Biological Nutrient Removal upgrade.

A version of this article originally appeared on cio.co.nz 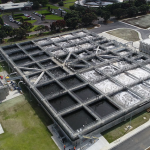